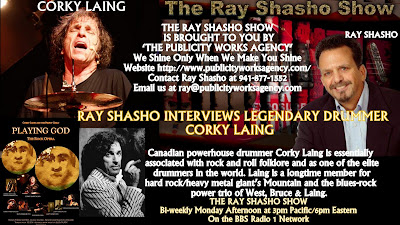 Our Very Special Guest Today is Canadian powerhouse drummer Corky Laing is essentially associated with rock and roll folklore and as one of the elite drummers in the world. Laing is a longtime member for hard rock/heavy metal giant’s Mountain and the blues-rock power trio of West, Bruce & Laing. But Laing’s musical collaborations are seemingly endless. A list that includes alliances with John Lennon, Jack Bruce, Meat Loaf, Noel Redding, Mahogany Rush, Ten Years After, Ian Hunter, Mick Ronson, Bo Diddley and Gov’t Mule …to  name a few. Laing is also a producer and composer.
Corky Laing has recently added a brand new chapter to his illustrious musical career.  Laing’s most recent project is a fascinating collaboration with two internationally acclaimed professors intermingling the decree of genetic engineering with a rock opera music scheme. The concept album entitled … Playing God is performed by the Perfect Child, an incredible ensemble of musicians and singers. At the core of the rock opera is Corky Laing who astounds instrumentally, lyrically and vocally. The album concept is brilliant and the music is colossal. It’s an awe-inspiring rock musical production and a cross between … Welcome to my Nightmare, The Wall and The Rocky Horror Picture Show.
… CORKY LAING PLAYS MOUNTAIN …

Sitting in with K2 (Peter Baron, Ken Sidotti & Joe Venti), a band saluting Mountain’s music, for a couple of gigs during 2014 and 2015 reminded Corky how much he liked playing Mountain songs the way they were originally written. Now he is looking at touring both Europe and the US celebrating the Mountain legacy. On the European tours Corky is joined by Joe Venti (formerly e.g. Leslie West Band) on bass and vocals, and Phil Baker (e.g. Uriah Heep Legends & Pulse Echoes of Floyd) on guitar and vocals. In November 2015 they tour the UK and in February 2016 Germany, playing the immortal Mountain classics and throwing in some West, Bruce & Laing and Cream for good measure.
… CORKY LAING PLAYS MOUNTAIN … is currently on tour.

Corky says …
“The drums are the best instrument in the world. When you’re a kid you go to your dad and say, dad, I want to grow up and I want to be a drummer. Your dad says …You’ve got to choose one or the other.” 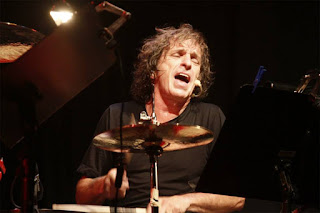 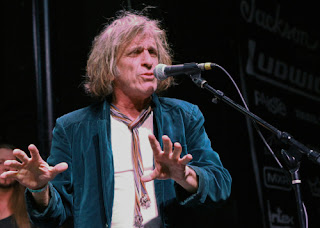 THE RAY SHASHO SHOW
Bi-weekly Monday Afternoon at 3pm Pacific/6 pm Eastern
On the BBS Radio 1 Network
THE RAY SHASHO SHOW
IS BROUGHT TO YOU BY
‘THE PUBLICITY WORKS AGENCY’
We Shine Only When We Make You Shine
Website http://www.publicityworksagency.com/
Contact Ray Shasho at 941-877-1552
Email us at ray@publicityworksagency.com
Posted by Classic Rock Here And Now at 10:12 PM