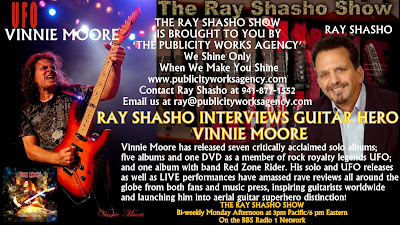 Our Very Special Guest Today is guitar virtuoso and songwriter Vinnie Moore who is a member of the hard rock/heavy metal group UFO.

The long awaited new album from the legendary guitarist has been released on Mind's Eye Music and is entitled “Aerial Visions’.
Vinnie has released seven critically acclaimed solo albums; five albums and one DVD as a member of rock royalty legends UFO; and one album with band Red Zone Rider. His solo and UFO releases as well as LIVE performances have amassed rave reviews all around the globe from both fans and music press, inspiring guitarists worldwide and launching him into aerial guitar superhero distinction!
Moore also had joined Alice Cooper's band for the (Operation Rock and Roll tour) and then appeared on the 'Hey Stoopid' (1991) album.

Vinnie has toured all over Europe, UK, Scandanvia, Brazil, and the USA, as well as performing in India, Korea, Mexico, Russia, and Canada. The UFO “A Conspiracy of Stars” toured  Europe in October and included nine shows in December as opening act for Judas Priest on their Redeemer of Souls tour. 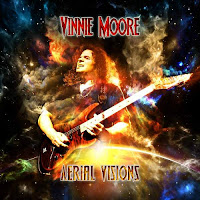 Be sure to purchase the long awaited new album from legendary guitarist Vinnie Moore entitled “Aerial Visions” on Mind's Eye Music. The album is available to purchase at amazon.com. For more information visit … www.vinniemoore.com
and www.facebook.com/Vinnie.Moore.Official

Vinnie Moore and UFO will be launching their USA tour from
Akron, Ohio on March 2nd.
RAY SHASHO INTERVIEWS UFO GUITARIST
VINNIE MOORE
POSTED ON YOU TUBE FROM BBS RADIO 1 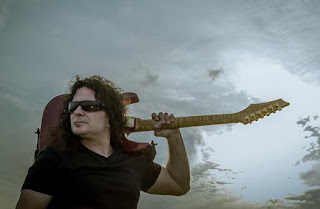 THE RAY SHASHO SHOW
Bi-weekly Monday Afternoon at 3pm Pacific/6 pm Eastern
On the BBS Radio 1 Network
THE RAY SHASHO SHOW
IS BROUGHT TO YOU BY
‘THE PUBLICITY WORKS AGENCY’
We Shine Only When We Make You Shine
Website http://www.publicityworksagency.com/
Contact Ray Shasho at 941-877-1552
Email us at ray@publicityworksagency.com
http://bbsradio.com/therayshashoshow
Posted by Classic Rock Here And Now at 1:28 AM