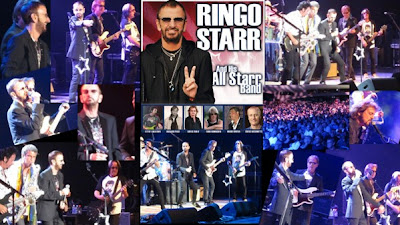 Ringo Starr and His All Starr Band performed a magnificent show on Sunday evening at Ruth Eckerd Hall in Clearwater, Florida. Every classic tune on the band’s setlist was played to its perfection and accompanied by a rousing standing ovation. The band appeared and sounded like a finely tuned racing machine, with engines revved and in immaculate condition. The 2012 All-Star lineup may be the best group of correlated musicians yet.

A diverse audience packed with both young and old was there to witness a legendary all-star rock band of virtuosos piloted by a member of the greatest rock ‘n’ roll band of all-time. It was an evening brimming with good vibrations, peace and love.
Before the show, everyone loaded up with Ringo Starr T-shirts and programs. The show began promptly at 7:30p.m with various members of the all-stars arriving quietly on stage. Loud and joyous cheers began to encompass the Hall while Santana’s legendary songster and keyboardist Gregg Rolie took his place behind the Hammond organ. Rolie was succeeded by the incredible guitarist and vocalist Steve Lukather of Toto, bassist and vocalist Richard Page of 80s pop sensation Mr. Mister, the melodious ingenuity of Todd Rundgren from Utopia’s progressive rock fame, accomplished drummer Gregg Bissonette, and Mark Rivera, saxophonist, percussionist, and legendary musical director.
The band began to play and the crowd rose to its feet while Ringo Starr glided on stage to take his spot behind the microphone for the opening number, “Matchbox” (#17 Billboard Hit in 1964) a rockabilly Carl Perkins penned tune covered by The Beatles.

Throughout the evening well-wishers acknowledged Ringo’s upcoming birthday on July 7th. Ringo will be turning 72 but looked remarkably fit and ageless on stage. Starr taunted the Ruth Eckerd audience by telling them not to wish him a happy birthday unless they were going to give him a gift. Near the end of the evening someone actually did give him a gift, and he ran backstage with it after the show.
The bands next selection was one of Starr’s biggest solo hits; “It Don’t Come Easy” (#4 Billboard Hit in 1971) followed by “Wings” a re-released tune for the new album Ringo 2012, originally recorded in 1977. Then Ringo sat behind his proverbial drums for the band’s next selections. Todd Rundgren was up next and featured, “I Saw the Light” (#16 Billboard Hit in 1972). Rundgren is a longtime veteran of the All-Star Band and is known for playing in Clearwater frequently. Todd played the Capitol Theatre most recently celebrating the Utopia reunion tour. Todd Rundgren is a living legend in the music world as a producer, guitarist, songwriter and singer. Here’s an interview I did with Todd Rundgren … http://www.examiner.com/article/exclusive-interview-todd-rundgren-talks-utopia-reunion-with-examiner-ray-shasho

For the first time ever on the tour Gregg Rolie was an All-Star, and well-deserved. The first of many thunderous ovations for the evening came after Rolie’s spectacular performance of the Santana classic, “Evil Ways.” (#9 Billboard Hit in 1969) Gregg Rolie has been overshadowed through the years by virtuoso guitarist Carlos Santana, but it was Gregg Rolie’s majestic vocals and magnificent keyboards that solidified the masterpiece of Santana. Rolie was the voice on almost every classic Santana hit. Rolie was also the founder and original vocalist for the band Journey. Read my interview with Gregg Rolie here... http://www.examiner.com/article/santana-and-journey-original-lead-singer-gregg-rolie-speaks-with-ray-shasho

Next, it was Steve Lukather the guitarist and vocalist for classic rock sensation Toto. Lukather is an awe-inspiring guitarist, which was evident after playing the role of Carlos Santana on all of Gregg Rolie’s Santana classics. Wow! Lukather jumped into Toto’s, “Rosanna” (#2 Billboard Hit in 1982, won a Grammy Award for “Record of The Year” in 1983).
Richard Page of Mr. Mister was spotlighted next singing, “Kyrie” (#1 Billboard Hit in 1986). Page is a sensational songwriter and musician. Ringo’s, “Don’t Pass Me By” (From The Beatles White Album in 1968) was next and followed by Rundgren’s signature classic, “Bang The Drum All Day” (1983 recording, all the instruments on the record were played by Todd).

Ringo announced he was going to sing a tune that he had sung for that "other band" and kiddingly remarked … “Rory Storm and the Hurricanes.” Appearing very Beatle-ish, Ringo belted out “Boys” (Originally sang by The Shirelles in 1960) behind his skins followed by another standing ovation. Ringo Starr gave the Clearwater audience back to back Beatles classics with his unmistakable narration of “Yellow Submarine” (#2 Billboard Hit in 1966). The entire Hall stood up, swayed, and sang throughout the song.

Gregg Rolie quietly announced his next selection, “Black Magic Woman” (1970 Hit, the album Abraxas reached #1 on the Billboard charts, written by Peter Green of Fleetwood Mac). The song spotlighted an unbelievable performance by Rolie on vocals and keyboards, Lukather on guitar, Bissonette and Rivera on percussions. Lukather’s role of Carlos Santana was astounding, it was an incredible jam.
Without an intermission, Ringo kicked off the second half of the show with, “Anthem” from his latest release, Ringo 2012 followed by, “I’m The Greatest”(Released in1973) a song written exclusively for Ringo by his former bandmate John Lennon.

Richard Page graciously thanked Ringo on stage for letting him perform a non-classic hit on the tour, “You Are Mine” from his 2010 release Peculiar Life. Then Steve Lukather of Toto led the band into a beautiful rendition of “Africa” (Number #1 Billboard Hit in 1983).
It was Gregg Rolie’s time to rock the house again with a tune that hadn’t been played by Santana in concert for quite awhile, “Everybody’s Everything” (Released in 1971 on Santana III album). Ringo followed with the Lennon-McCartney penned earlier rocker, “I Wanna Be Your Man” (1963 release, recorded by The Rolling Stones and The Beatles).

It was apparent throughout all their performances that the band respected each others virtuosity but genuinely just had a lot of fun.
Todd Rundgren was back in the spotlight again to sing his heartfelt composition written for his progressive rock band Utopia called, “Love Is The Answer” (Utopia released it in1977, it became a huge hit for England Dan & John Ford Coley in 1979). Another heartfelt composition, “Broken Wings” (Number #1 Billboard Hit, released in 1985) by Mr. Mister’s Richard Page followed. Then it was time to raise the roof again, Steve Lukather rocked the house with the Toto hard- rockin’ classic, “Hold The Line” (1978 release #5 Billboard Hit) followed by a roaring standing ovation.

The evening wound down with Ringo Starr’s classic single, “Photograph” (#1 Billboard Hit, released in 1973) followed by The Beatles cover tune, “Act Naturally” (Released in 1965). The show concluded with the band playing The Beatles classic, “With a Little Help From my Friends” (Released in 1967, also performed at Woodstock by Joe Cocker and The Grease Band) and a smooth segue into the John Lennon penned anthem, “Give Peace A Chance.” The Ruth Eckerd audience was on its feet singing and displaying peace signs throughout the entire rendition.
There wasn’t one shining star this evening … just a galaxy filled with all-stars.
The entire band was extraordinary! Nevertheless, here are my picks for the top crowd pleasing songs of the evening and not in any particular order. Gregg Rolie- “Evil Ways,” Steve Lukather- “Hold the Line,” Richard Page- “Broken Wings,” Todd Rundgren- “Love Is The Answer,” Ringo Starr- “With A Little Help From My Friends.”

Ringo Starr and His All Starr Band official website www.ringostarr.com
Very special thanks to Elizabeth Freund of Beautiful Day Media and the entire staff at Ruth Eckerd Hall.

Buy Ray’s very special memoir called ‘CHECK THE Gs’ -The True Story of an Eclectic American Family and Their Wacky Family Business … You’ll LIVE IT! Also available for download on NOOK or KINDLE edition for JUST .99 CENTS at amazon.com or barnesandnoble.com -Please help support Ray so he can continue to bring you quality classic rock music reporting. 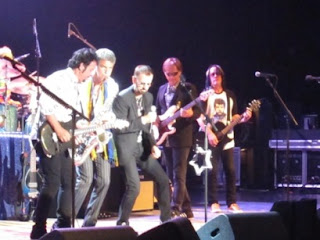 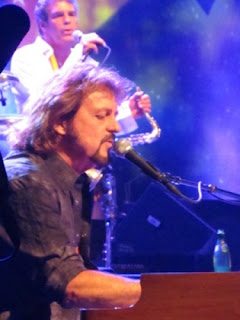 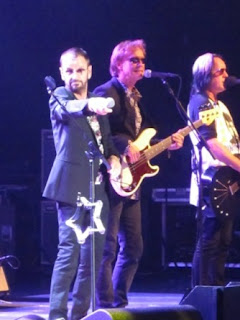 Posted by Classic Rock Here And Now at 3:49 AM