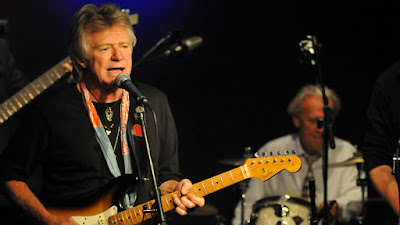 Guitar hero DAVE EDMUNDS has never followed music trends, and throughout what Edmunds jokingly remarks as a “semi-retired” music career, has probably been more devout and grateful to the original rock and roll format than any other musician.

Edmunds recently released his new album entitled ‘Rags & Classics’ via the MVD Entertainment Group. It’s an all-instrumental masterpiece that displays Edmunds’ proficient guitar work along with his brilliant multi-instrumental and production skills. Recorded in his home studio, most of the cover tracks on the new album have never been performed as an instrumental and are extremely difficult to implement as a one man band. 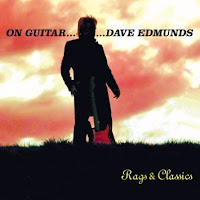 I really enjoyed ‘Rags & Classics,’ Edmunds did a remarkable job handpicking singles that are classics but rarely relished. Some of the more notable tracks are the Brian Wilson &Tony Asher “God Only Knows,” and the Elton John &Bernie Taupin ballad “Your Song,” Both tracks are remarkable instrumental renditions while acquainting the listener to a fresh prospective to an ageless classic. ‘Rags & Classics’ delivers an eclectic mix of captivating musical gratification … you’ll be delightfully swayed by Edmunds’ intricate instrumental renderings of Mason Williams’ “Classical Gas,” Procol Harum’s “A Whiter Shade of Pale,” tracks from Dave’s guitar heroes … Chet Atkins “Black Mountain Rag,” and Merle Travis “Cannonball Rag,” and a surprisingly but phenomenal finale to an exceptional album, Mozart’s Symphony No.40 in G Minor, Molto Allegro. Everyone will truly enjoy ‘Rags & Classics’ by guitar legend Dave Edmunds. ... (5) Stars!

DAVE EDMUNDS, Welsh guitarist, singer, songwriter and producer has collaborated with some of the greatest musicians the world will ever know, including longtime pal George Harrison. Edmunds is a 1950’s rock and roll purist and remains a loyalist to this day.
After his stint with the blues/rock band Love Sculpture, Edmunds scored big with his cover hit …
“I Hear You Knocking” (1970), a song written by Dave Bartholomew & Earl King and first recorded by Smiley Lewis in 1955. Edmunds’ rendition added authentic rock and roll dynamism and landed at #1 at Christmas on the UK charts and #4 on Billboard’s Hot 100 in the U.S.  It sold over three-million copies, was awarded a gold disc, and became a rock and roll standard worldwide.

In 1976, Edmunds began collaborating with British musician/singer/songwriter/producer Nick Lowe (Brinsley Schwarz) on several albums. Lowe and Edmunds were signed to different record labels and couldn’t record together as ‘Rockpile’ until 1980 when they released Seconds of Pleasure, their only album to feature the ‘Rockpile’ band name. Drummer Terry Williams and guitarist Billy Bremner were also in the group. Critics and music enthusiast adored Rockpile. Edmunds describes Rockpile’s short and sweet musical career as as a party band for four years which they never took seriously.Rockpile was also hailed as a band that laid the groundwork for ‘new wave.’ 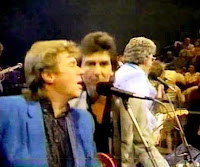 Dave Edmunds was selected to play in Ringo Starr’s All-Starr Band for tours in 1992 and 2000.

I had the rare pleasure of chatting with David Edmunds recently about his new all- instrumental cover album ‘Rags & Classics,’ the inception of  “I Hear You Knocking,” Rockpile, Nick Lowe, Carl Perkins, George Harrison, my infamous ‘Field of Dreams’ question and much-much more! 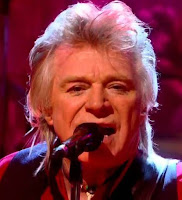 Ray Shasho: Hello Dave! First of all, thank you for staying true to rock and roll. With all the changes in the music industry over the years, you remained loyal and I commend you for that.
Dave Edmunds: “Yeaaaaaaaa!”
Ray Shasho:  Your new album entitled ‘Rags & Classics’ is your very first instrumental release. It’s an incredible mix of classics recorded instrumentally while spotlighting your proficient guitar playing as well as your multi-instrumentalist skills.
It’s an impressive recording that everyone should enjoy listening to over and over again.

Dave Edmunds: “I wasn’t sure how it would be received because it’s very different from what I’ve done and from what everyone else is doing. I had the whole idea for doing this sort of album because it was done in a home studio. If I had to rent a studio and book musicians, engineers, and all that, it would have never got made. My studio is a Logic Pro 9 on my MacBook Air in the shed at the end of my backyard, I don’t need much now. There’s no pressure or hours to keep to, I just do it when I feel like it.”

“I started putting down Merle Travis/ Chet Atkins things because I was interested in that since I was about 16-17 years old, but then I went off that stuff and just started playing rock and roll. So I’ve come back to it and thought I’d get it down, and then I thought, what could I do with a Stratocaster, because that’s my main guitar, and I just thought of these songs. What I really like is a well-crafted pop record, apart from all the other genres of music; I do appreciate a well-made put together, well-written, produced and recorded pop record. I was going through my list of absolute favorites and that’s where I got these, I could hear them on the guitar. I did the backend tracks so you’ll hardly tell the difference from the original and that’s a trip in itself for doing “God Only Knows” and whatever, and then the Telecaster comes screaming in and you go, whoa, what this! (All laughing) I wanted to do something well-known, because if you want to get people’s attention with new instrumentals of tunes they never heard, just been written, or obscure, it will be very difficult to hold their attention. But if you provide them with something everybody knows and then put the guitar on, everyone knows the lyrics and its nice listening to in your car.”
Ray Shasho: Dave, the mix of music you chose for this album is just perfect. I really enjoyed your version of “God Only Knows” the Beach Boys classic. I don’t think I’ve ever heard an all-instrumental track covering that tune.
Dave Edmunds: “No one had done it as an instrumental before. It was such a blast doing it and capturing what Brian had done, for instance, weird instrumentation. The only intro on the song is two accordions and a French horn, and that’s it. You go, wow, who’d of thought of that? But it was such fun doing it.”
Ray Shasho: Your cover of Elton John’s “Your Song” was also brilliant!
Dave Edmunds: “I’m proud of that one, it came together nicely. I was sitting late at night on my sofa ready to go to bed and was plugged into my Logic Pro 9 and my Taylor guitar, and I had sort of worked it out before, but I just played  it all the way through in one take. Then I added a bass and a few strings on the keyboard and that was it. Yea, I like that one.”
Ray Shasho:  On the next track you come in with “Black Mountain Rag” á la Chet Atkins. Your guitar playing almost sounded like you were playing a 12-string.
Dave Edmunds: “I did a double track on that one a bit. I used a Taylor acoustic and a T5 which is like an electric acoustic. There’s two ‘Rags’ on there and can’t remember which one I used on each.”
Ray Shasho: Another great track on ‘Rags & Classics’ is a song dear to my heart, and that is Mason Williams’ “Classical Gas.”  I used to sign-off my radio show with that song every night when I worked as a deejay.
Dave Edmunds: “When I did a recording of that one it was very similar to the Mason Williams version, so for that I thought I’d do it a bit different, so I did it in a swing beat with a raucous bass going underneath it. Then I played some drums on top of that last, which is very difficult to do.  I think this album is a good example of my style guitar playing and production.”
Ray Shasho: The final track on the new album is a surprising finale … Symphony No. 40 in G Minor, Molto Allegro (Mozart).
Dave Edmunds: “I thought that’ll fool them! When I was living in LA, my wife Cecilia and I went to the movies and saw Amadeus. I didn’t know much about Mozart or classical music and on the way home we stopped at Tower Records and she went over to the classical music section and bought the best of Mozart CD ($4.95) all laughing. So I played it at home and instantly thought … now I get it! This is why people talk about the genius of Mozart. I just started picking it with a thumb pick, just the intro, and I thought what am I doing? I kept listening to the original and inched my way through it with the guitar, learning it, then I decided to do some solo acoustic gigs around America and I learned to play it as the last song of the set, and it went down a storm every time because people couldn’t believe it, what’s this guy doing alone onstage with an acoustic and playing Mozart’s 40th. It never failed and it was great!” 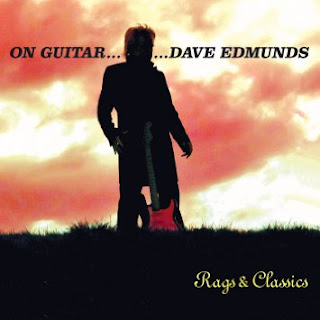 You can purchase Ray Shasho’s latest novel Wacky Shenanigans on F Street –Proud to be Politically Incorrect in Washington D.C. -available at amazon.com or barnesandnoble.com- Please support Ray by purchasing his book so he may continue to bring you quality classic rock music reporting.