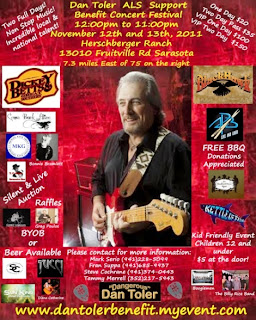 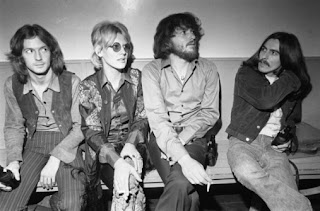 This coming Saturday and Sunday November 12th and 13th will be “The biggest and best concert this area has seen for a long a time” says Mark Serio guitarist and organizer for the benefit to support ‘Dangerous Dan’ Toler and raise awareness for ALS or better known as Lou Gehrig’s disease. Guitarist ‘Dangerous Dan’ Toler is best known as a member of The Allman Brothers Band, The Gregg Allman Band and Dickey Betts & Great Southern. Earlier this year Toler announced that he had the disease. Recently his condition has worsened and now has trouble speaking.

His younger brother David “Frankie” Toler drummer and former member of The Allman Brothers Band died earlier this year from a prolonged illness.

Last year I covered an event hosted by “Sarasota’s Littlest Heroes” (who were many of the same organizers) to help raise money for two year old Emalynn Roberts diagnosed with Chronic Inflammatory Polyneuropathy. The concert was held at the same location and headlined by Dickey Betts & Great Southern. The event was a huge success.

The event takes place on Hershberger Ranch at 13010 Fruitville Rd in Sarasota just 7.3 miles east of I-75 on the right. It’s two full days of non-stop music –including free Barbeque, silent and live auctions and raffles. Online auction at http://www.dantolerbenefit.myevent.com/3/auction.htm
BYOB or beer is available to purchase at the event. The festivities begin at 12pm and ends at 11pm each night.

Tickets are $20.00 for a one day pass and only $35.00 for both dates. There are also VIP tickets available. Purchase tickets here or at the door on the day of the concert. http://www.dantolerbenefit.myevent.com/3/online_payment.htm
Call Mark Serio at (941)228-5099 for further information about the event.

In 1969 Delaney & Bonnie supported Eric Clapton’s short-lived Blind Faith band on the road. Their certified gold third album On Tour with Eric Clapton was their most commercially successful release. In 1970 Delaney & Bonnie & Friends participated in the Festival Express tour (originally billed as the Transcontinental Pop Festival) by train across various Canadian cities with The Grateful Dead, Janis Joplin and The Band. Festival Express was a 2003 documentary film about the 1970 train tour including concert footage across Canada. Also in 1970 the band appeared at The Strawberry Fields Festival in front of an estimated 100,000 people in Ontario, Canada.

Delaney & Bonnie’s most memorable hits were Dave Mason’s penned “Only You Know and I Know” and “Never Ending Song of Love.” Bonnie Bramlett also co-wrote “Let It Rain” with Eric Clapton.

Bonnie enjoyed continued success as a solo composer and recording artist while sharing her amazing vocals with Elvin Bishop, Stephen Stills, Little Feat and The Allman Brothers Band throughout the 70’s and 80’s.
In 1979 Bonnie Bramlett participated in the acclaimed Havana Jam Festival in Cuba.
Under a new married name Bonnie Sheridan, she became an actress with an ongoing role on the TV sitcom Roseanne from 1991-95.

The Dan Toler Band follows Bonnie Bramlett and then headliner’s Dickey Betts & Great Southern take the stage at around 8:30pm.

Dickey Betts, a Bradenton native, had formed a band in Florida with bassist Berry Oakley.One night they jammed with another local group featuring Duane and Gregg Allman, and The Allman Brothers Band formed in 1969. After the death of Duane Allman in 1971, Betts became the bands sole guitarist.
Dickey Betts was inducted along with the rest of The Allman Brothers Band into the Rock and Roll Hall of Fame in 1995.

The afternoon lineup includes a rendition of 50’s rock and roll icon’s The Platters recreated by Wilson Williams and his Platters.

The Artimus Pyle Band will take the stage late afternoon. Artimus Pyle was inducted into the Rock and Roll Hall of Fame in 2006 as a member for the Southern Rock /Classic Rock radio mainstay Lynyrd Skynyrd.

Blackhawk (The Outlaws) are the headliners for Sunday evening and will be performing at 8:30pm.
There may even be surprise guests performing during the two-day event.

For a complete listing of performers appearing at the ‘Dangerous Dan’ Toler two-day benefit concert go to http://www.dantolerbenefit.myevent.com/3/miscellaneous2.htm

The event is this coming Saturday and Sunday November 12th and 13th on Hershberger Ranch at 13010 Fruitville Rd in Sarasota just 7.3 miles east of I-75 on the right. 12pm to 11pm each day.
Come out and enjoy good food and great music by legendary performers and help support the fight against ALS.

“Original, Entertaining and Hilarious-- This book has all the elements of a classic in the making. The novel is centralized around Raymond, a boy growing up around the family business in Washington, DC...but that is just the tip of the plot. The dynamic characters really make this memoir.”  - Reviewed by a local high school English Teacher.

Posted by Classic Rock Here And Now at 4:55 PM No comments: