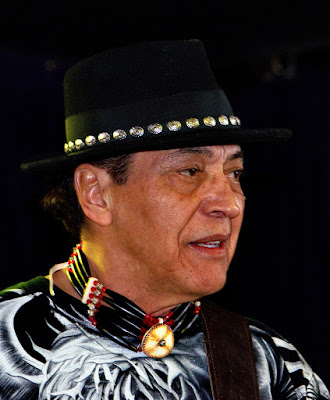 According to cofounder, bassist, singer and songwriter Pat Vegas, it was Jimi Hendrix who talked the musicians into forming an all-Native American rock group. Vegas told Record Collector writer Jeremy Isaac, "Hendrix was a friend of ours.... and he was half Indian. Once he knew that we were Indian too he used to come and hang with us because of that. Jimi made me aware of my roots: He'd say, 'Native American is beautiful, man, be proud of that.'"
Redbone's story is interesting from more than one point of view. The band itself of course, who had a great career, with ups and downs. The fact that the musicians were all native Americans from different origins (Cherokee, Yaquis, Apaches and Shoshones...). Their political implication and the fact they were censored, shows a very interesting political and social background of the US nation. All this plus the fact that they produced a unique, powerful and soulful music! 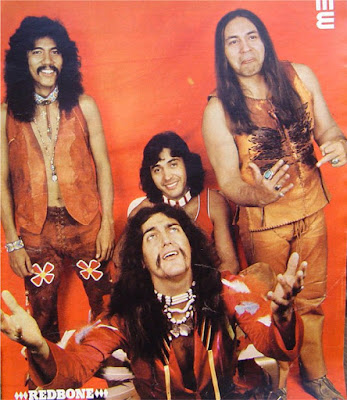 The name Redbone itself is a Cajun term for a mixed-race person ("half-breed"), the band's members being of mixed blood ancestry. The band referenced Cajun and New Orleans culture many times in their lyrics and performing style.
The mid-seventies were the period of big success, not only in the USA but even more in Europe and especially in the Netherlands. Maggie, The Witch Queen of New Orleans, Come and Get your Love, Wounded Knee and even Suzy Girl were big hits in many European countries, some reaching Number One. This led the band to tour and play almost non-stop during this period. 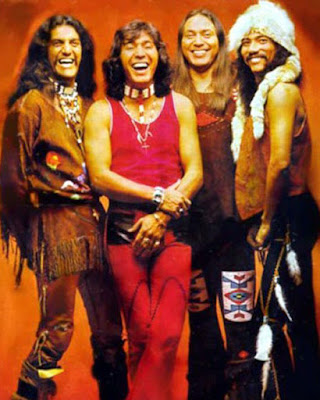 They shared the stage at various times with Dr. Hook, Albert Hammond, and others. Highlights on U.S. tours include playing at Carnegie Hall in New York with Argent and Kiss, opening for Marvin Gaye at the Forum in Inglewood, California, sharing the bill with Parliament Funkadelic in Philadelphia, and playing with Steely Dan at the Convention Center in Las Vegas.
Pat Vegas has continued to write music over the years. Some tunes had been recorded since 1980, with Lolly of course, but also with Tony bellamy for some songs. Finally, in 2005 Pat puts this work out on a new CD called One World. It was released in 2005 by a small independent record company. It was reedited in 2009 and retitled as Peace Pipe. At the same period Pat Vegas recreates the band with new musicians. They tour mainly in the west of the United States since.
Redbone was inducted into the Native American Music Association Hall of Fame in 2008, as well as the New York Smithsonian in 2013. 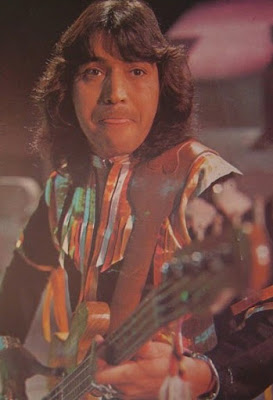 In 2014, "Come And Get Your Love" experienced a resurgence in popularity – and has been thoroughly embraced by a new generation - when it was featured in the Marvel Studios film Guardians of the Galaxy as the very first, and many say most important song, on a mixtape made for the film’s hero, Peter Quill- “Starlord” It was also included on the film's soundtrack album, which reached the Number 1 on the Billboard Top 200 chart, where it remains.  When released as a single in 1974  it went certified Gold, selling well over one million copies, and it is a song that just does not fade away-- there have been over one hundred million hits on
YouTube alone.
Since 2015 "Come And Get Your Love" has been used as the theme song for Netflix produced cartoon series “F is for Family” and the TV series “Big Shrimpin”.

For more information about Pat Vegas and Redbone visit … http://www.redbone.be/  or 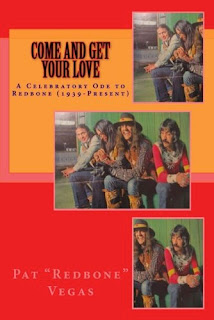 Come and Get
Your Love

A Celebratory Ode to Redbone (1939-Present) 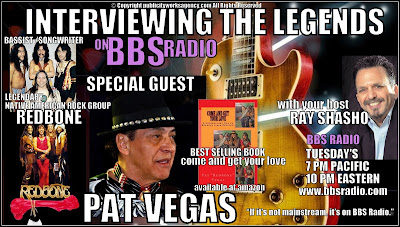 Have a great week everybody!
Posted by Classic Rock Here And Now at 10:49 PM No comments: