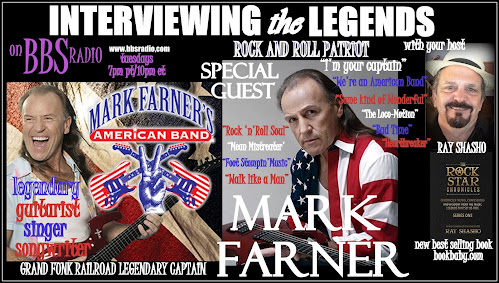 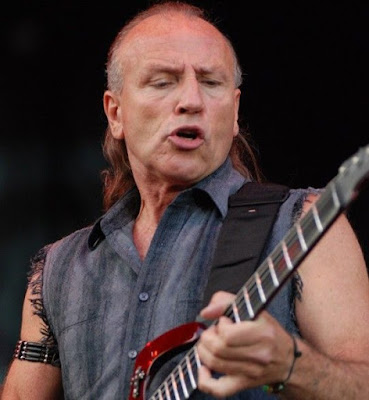 Legendary all-American frontman and guitarist, Mark Farner, was the engine that pulled the original Grand Funk Railroad repeatedly to the top of the charts, and today he’s a platinum recording artist 30 times over. At age 71, Farner commands the stage with the same intensity and outpouring of love as he did during the summer of ’69 and his fans are still flocking to see “the Captain.” The rock patriot’s synergy and open heart still come through in epic hits that defined a generation including— “I’m Your Captain” (Closer to Home)”  “We’re An American Band” “Heartbreaker” “Bad Time To Be In Love” and recut covers of  “The Loco-Motion” and “Some Kind of Wonderful.”  Being viewed as a “Rockstar” is only one facet of the legacy of this Michigan-born son. 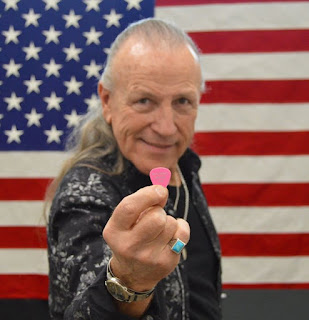 Mark is as real as they get: he’s a husband, a father, and grandfather, and in his fourth decade of marriage to wife Lesia. He’s a true family man.
“I think our fans originally connected to our songs because we were sincere” Farner said. “My lyrics were about Mother Earth, stopping the war, and all about love. They still have a point of reference with me in their heart.”
After the 1969 Atlantic Pop Festival put Grand Funk Railroad on the fast track, the band topped the Billboard Chart twice with both the anthem “We’re an American Band” (1973) and 1974’s “The Loco-Motion.” The Flint, Michigan trio reached the top 10 again with “Some Kind of Wonderful” (No. 3) and “Bad Time” (No. 4) before GFR disbanded for the first time in 1976. Farner briefly rejoined Grand Funk during the 1980s and 1990s and he has collaborated with many other artists over the years.  However, his focus has been to forge an enduring solo career based upon bringing his message of love to his fans in all corners of the world. 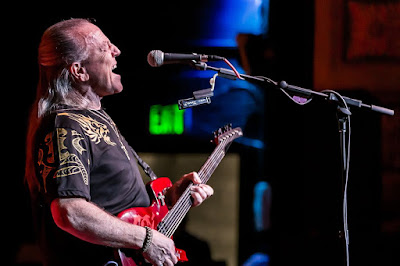 “Love is unconditional,” he explains. “Just like when you hold a baby, the love transfers. I feel that love from the audience when I’m on stage.”
The son of a World War II veteran, four-time bronze star recipient and career fireman, Farner also knows the importance of brotherhood and commitment. On his mother’s side, he champions his Cherokee heritage and the fact that his mother was the first woman welder in the United States to weld on a tank during World War 2. It just so happened to be the same type of Sherman tanks his father drove. Farner’s work on and off the stage is focused on honoring service personnel and veterans and offering support to American farmers, individuals with disabilities, and downtrodden populations.
Farner, the rock patriot that he is, works tirelessly to honor our nation’s service personnel and Veterans wherever they are stationed. He wants everyone to remember the huge sacrifices our men and women in the armed services freely give; all to protect our amazing country and freedoms. 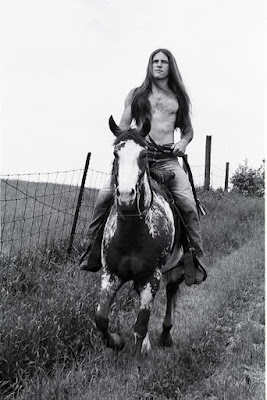 Over 50 years later something magical still happens when Farner takes the stage.  His voice is still strong and on key, his guitar playing still slick and lighting quick, and his trademark prancing still commands the stage and mesmerizes his audiences around the world.
“I love playing live where I can connect with people of all backgrounds,” he said. “It’s all about the fans…and all about love.” 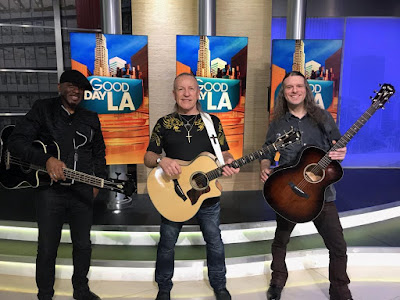 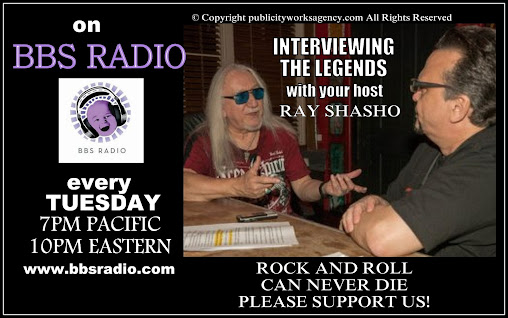 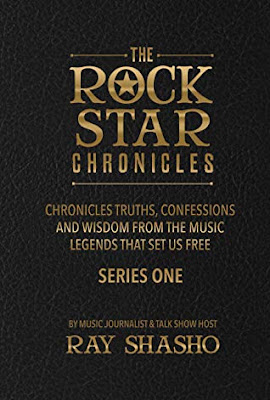 MY NEW BOOK IS FINALLY OUT!
ENTITLED
THE
ROCK STAR
CHRONICLES
SERIES ONE
CHRONICLES, TRUTHS, CONFESSIONS AND WISDOM FROM THE MUSIC LEGENDS
THAT SET US FREE
…Order yours today on
Hardcover or E-book
at bookbaby.com
Featuring over 45 intimate conversations with some of
the greatest rock legends the world will ever know.
CHRIS SQUIRE... DR. JOHN... GREG LAKE... HENRY MCCULLOUGH... JACK BRUCE … JOE LALA…  JOHNNY WINTER... KEITH EMERSON... PAUL KANTNER...  RAY THOMAS... RONNIE MONTROSE... TONY JOE WHITE... DAVID CLAYTON-THOMAS… MIKE LOVE... TOMMY ROE... BARRY HAY... CHRIS THOMPSON... JESSE COLIN YOUNG... JOHN KAY... JULIAN LENNON... MARK LINDSAY... MICKY DOLENZ… PETER RIVERA ...TOMMY JAMES… TODD RUNDGREN... DAVE MASON... EDGAR WINTER... FRANK MARINO... GREGG ROLIE... IAN ANDERSON... JIM “DANDY” MANGRUM... JON ANDERSON... LOU GRAMM... MICK BOX... RANDY BACHMAN… ROBIN TROWER...  ROGER FISHER... STEVE HACKETT... ANNIE HASLAM… ‘MELANIE’ SAFKA... PETULA CLARK... SUZI QUATRO... COLIN BLUNSTONE… DAVE DAVIES... JIM McCARTY...
PETE BEST
THE ROCK STAR CHRONICLES
BOOK TRAILER
BOOK REVIEW
-By Literary Titan (5) STARS
The Rock Star Chronicles, by Ray Shasho, is a splendid book written by a music enthusiast who has poured their heart and soul into it. It’s a story of a boy who loved rock music, and his obsessive passion of it earned himself the name Rock Raymond. He went to school but instead was schooled in all matters of music while his peers were buried chin-deep in coursework. He then became a radio DJ and has now compiled a book on all interviews he held with Rock gods who raided the airwaves back in the 70s and 80s. It’s a compilation of interviews with outstanding vocalists, legendary guitarists and crazy drummers in the rock music scene. Each interview gives a reader an in-depth view into their personal lives and the philosophies that guide their lives which all serve to humanize these great icons. For readers who are old enough to call themselves baby boomers this book will bring old memories back to life. Millennials, on the other hand, may think of this book as a literal work of the Carpool Karaoke show.
The Rock Star Chronicles is a book I didn’t know I was waiting for. To come across a book that will talk me into trying something new. One brave enough to incite me to venture into new frontiers. This book made me a believer- I am now a bona fide Rock and Roll music fan.
Ray Shasho masterfully gets the interviewees talking. He smartly coaxes answers from them with crafty questions designed to get a story rolling out of them. The artists talk about diverse issues ranging from music, politics, and their social engagements. Having been on the music seen all his life, Ray Shasho knows the buttons to press, how to get them comfortable about talking about their lives.
The book’s cover is befitting of its subject matter with the leather look offering a royal background to the golden letter print. It speaks to how high a level rock music holds in the pecking order- arguably, modern music as we know it has originated from blues and rock music.  The second noteworthy thing is the use of high definition pictures to reference the musician being interviewed in every sub-chapter. This ensures that the book is for both original rock and roll lovers and aspiring new ones. Together is makes for a refreshing and consistently enjoyable read.
I recommend this book to rock music enthusiasts, aspiring musicians wondering what it takes and all readers curious to learn new things by going back in time.
https://literarytitan.com/2020/05/03/literary-titan-book-awards-may-2020/   Gold Award Winner 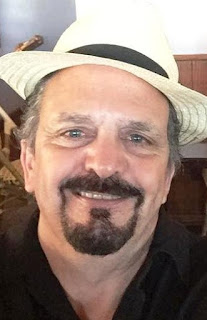