Exclusive Interview: Mick Box of Uriah Heep “When We Were Onstage, We Were Untouched and Unbeatable." 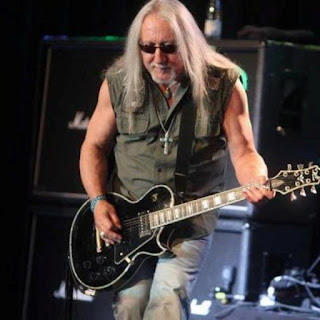 By Ray Shasho
An Interview with Uriah Heep's Mick Box

Legendary British guitarist Mick Box has devotedly performed with his quintessential hard rock band Uriah Heep for nearly 45 years. Box is the only original member of the band that remains since its inception in 1969, but the mastery of Uriah Heep endures while preserving its rightful place in rock and roll folklore.

1972 thru1976 became Uriah Heep’s most successful era worldwide. The band was spearheaded by their manager and producer Gerry Bron. All of Uriah Heep’s albums through 1983 were released on Gerry Bron’s ‘Bronze Records’ label in the UK. Bron had been producing Uriah Heep for Vertigo Records before starting his own record label.

Sadly, Thain died in 1975 from a heroin overdose and was replaced with King Crimson’s John Wetton. New Zealander Gary Thain was 27 years old.

Uriah Heep’s fourth studio album Demons and Wizards became their most successful release selling over three- million copies worldwide and spawned the hit single “Easy Livin’” (#39 on Billboard’s Hot 100). Although Demons and Wizards (1972) was considered the bands breakout album, it was actually their double live LP, Uriah Heep Live (January1973) that launched them into superstardom status.

The Uriah Heep Live album was recorded in 1973 at Town Hall in Birmingham, England. The double-live album featured gatefold sleeves with picture pages resembling a concert program of the band performing. The idea was for the listener to receive the full concert experience while relaxing at home. (Kiss Alive! mimicked the format of the Uriah Heep Live release.) The album’s immaculate sound engineering was equally matched by the bands impeccable live performance and the vitality of the audience. It was the Uriah Heep Live album that enabled the group to headline and sell-out the huge arenas worldwide.

Uriah Heep finally decided on John Lawton (Lucifer’s Friend). Heep’s choice inadequately satisfied a distinguished rock and roll legacy left my Byron, but Lawton’s pipes were exactly what they needed at the time. A new scheme materialized as Uriah Heep recorded their tenth studio album Firefly (released in 1977) and began touring as the supporting act for Kiss. The track “Wise Man” was their first successful single with the new lineup.
The bands distinct hard rockin’ reverberation was abandoned with the ‘poppy’ release of their single “Free Me.” But the tune became an international hit. Friction between Hensley and Lawton developed and escalated to the point where Lawton was forced to leave the band.

Mick Box miraculously compiled a new lineup from the falling ashes. Box convinced drummer Lee Kerslake to return and hired Peter Goalby (Trapeze) as the bands new lead singer. Box also hired John Sinclair (The Babys, Black Sabbath) on keyboards and Bob Daisley (Ozzy Osbourne’s band) on bass guitar.
Uriah Heep released the critically acclaimed album, Abominog in 1982. The album produced by Ashley Howe, spawned the U.S. Hits, “On the Rebound” and “That’s the Way That It Is,” which became the band’s highest charting single at #25 on the Billboard charts. Howe and Heep followed the success of Abominog with Head First in 1983. Bassist Bob Daisley left to rejoin Ozzy Osbourne, but Trevor Bolder rejoined Uriah Heep for good.
The band regained much of its popularity and toured the U.S. supporting bands like Rush, Def Leppard and Judas Priest. During this period, Bronze Records collapsed and the band’s financial condition was in question. They secured a new deal with CBS’s Portrait Label. They also hired Harry Maloney to replace Gerry Bron their longtime manager and producer.

After the release of the Equator (1985) album, more lineup changes ensued. After incurring voice related issues, Peter Goalby left Uriah Heep. Then John Sinclair left returning to Ozzy Osbourne’s band. Stephen “Steff” Fontaine was briefly brought in to be the band’s new lead singer but wasn’t disciplined enough to remain with the band.

While changes were happening in the American music scene …Uriah Heep shifted their principal touring circuit to Germany, the Netherlands, Scandinavia, Japan and Russia. The band returned to Britain in 1988 to play the Reading Festival and eventually toured the UK.

Ken Hensley and John Lawton rejoined the band for a reunion gig in London in December of 2001.

In October 2009, Uriah Heep released their 40th anniversary celebration album. It’s the bands 22nd album and features re-released classics by the group as well as two specially recorded tracks for the album.

The band performed at The High Voltage Festival in London’s Victoria Park in July of 2010.

Today Uriah Heep periodically plays U.S. dates at the smaller venues. The band’s latest release is entitled … Into the Wild (released in 2011) on Frontiers Records.

It may seem like ages since Uriah Heep’s first American show in Indianapolis supporting Three Dog Night, but Mick Box and Uriah Heep have affirmed that the band can withstand the test of time.


Box says, “I came in to be a musician for life …that was my focus, it’s been a brilliant ride so far and long may it last.”

I had the rare pleasure of chatting with guitarist Mick Box recently about his incredible journey with Uriah Heep. 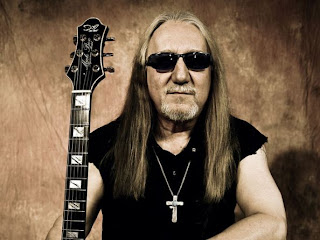 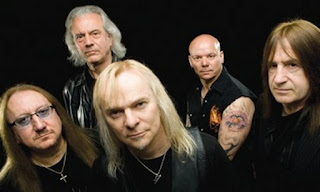 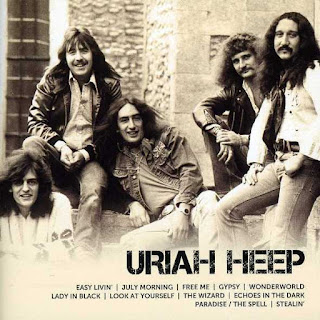 Posted by Classic Rock Here And Now at 8:28 PM