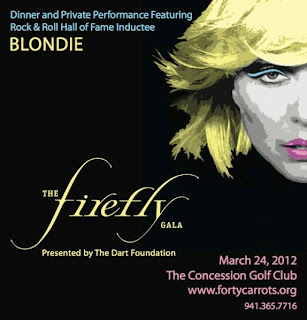 
Rock and Roll Hall of Fame inductee Blondie will be performing a private concert on Saturday March 24th at the Concession Golf Club in Bradenton. The Firefly Gala is a fundraiser for Forty Carrots Family Center and sponsored by The Dart Foundation.

Guided by the belief that the family is the foundation of our society, Forty Carrots Family Center is a nonprofit organization in Sarasota, Florida dedicated to strengthening families through educational programs for parents, children, and professionals in the field. 92% of the families served by Forty Carrots receive free early childhood and parenting education thanks to the generosity of the community. Forty Carrots serves a broad cross section of the community-from teen parents and young homeless mothers to stay- at- home parents and young professionals.


The event is by invitation only. Invites are available to donors and sponsors. To donate and/or sponsor the event, contact the benefitting charity, Forty Carrots Family Center at 941-365-7716 or email at info@fortycarrots.com or visit www.fortycarrots.org.

Tickets (including tables and couples) are currently available through sponsorships. Gala tickets (including dinner and the concert) will be on sale for $250 per guest.
The Concessions Golf Club is located at 7700 Lindrick Lane in Bradenton. The event begins at 6p.m. The Gala includes world class dining by renown restaurateur and Chef Sean Murphy and an opportunity to win exciting auction prizes. Last year’s Gala spotlighted KC And The Sunshine Band.

Blondie was formed in 1974 by original guitarist Chris Stein and Miami- born Debbie Harry. The band amassed huge Punk followings at New York’s famed CBGB’S, Max’s Kansas City (Debbie Harry was once a waitress there) and Mothers. Blondie’s overwhelming popularity led them to the studio where they recorded their first album called Blondie in 1976 - under the Private Stock label.

The band toured in 1977 with Iggy Pop and David Bowie in support of their first album.
In the summer of 1977, Blondie released their second album called Plastic Letters, followed by a tour of Europe and Asia.

They were considered to be a ‘New Wave’ -underground band until the release of their third studio album called Parallel Lines. The album considered to be their best effort spawned huge hits like- “Hanging on the Telephone,” “Sunday Girl,” “One Way or Another,” and their Billboard Hot 100 number #1 mega hit “Heart of Glass.”  The song was sneered at by their faithful as a sellout to their rooted Punk and New Wave principals for entering the commercially successful world of Disco music. Nevertheless, the Harry/Stein penned chart topper went Gold and became Blondie’s trademark tune.
During my stint in radio as a deejay, “Heart of Glass” and Peaches and Herb’s “Reunited” became the most requested songs on the airwaves.

Over the next several years, Blondie became known for their eclectic music styles. While maintaining a ‘New Wave’ base, the group ventured into Disco, Pop, Rap and Reggae.

In 1979, Blondie released their fourth studio album called Eat to the Beat. The album generated the hits “Dreaming” #2 in the U.K., Atomic #1 in the UK and “Call Me” (theme song from American Gigolo) spent 6 weeks at #1 in the U.S. and became their biggest hit song.The album  also went certified Platinum.
Blondie’s fifth album, Autoamerican spawned the Reggae-ish tune “The Tide is High,” another #1 hit in the U.S. and U.K. and “Rapture” another #1 hit.  Released in 1981, Rapture was considered crucial in formulating Rap music. It was the first single with rap content to be a chart-topper in the U.S. The album went Platinum.

After the release of their sixth studio album called The Hunter in 1982, the band split-up and Debbie Harry pursued a solo career. The album produced their final U.S. hit called “Island of Lost Souls” before Chris Stein fell ill with a rare and often fatal genetic disease which led to the band’s breakup. Harry cared for Stein who eventually recovered.

Blondie reformed in 1997 and regained their popularity with the release of their seventh album called No Exit. The album produced the #1 hit single in the U.K. and 14 other countries called “Maria.” The album sold more than 2-million units worldwide.
Albums that followed were No Exit, Live in New York, Livid, The Curse of Blondie, Live by Request, Live, Best Live and Live in Toronto.

Blondie celebrated their 30th anniversary in 2006 with their induction into the Rock & Roll Hall of Fame and the release of Greatest Hits: Sound &Vision, a best-of collection that contained all their classic videos.
Blondie has sold more than 40 million records worldwide.

Order your copy at amazon.com, iuniverse.com, barnesandnoble.com or borders.com 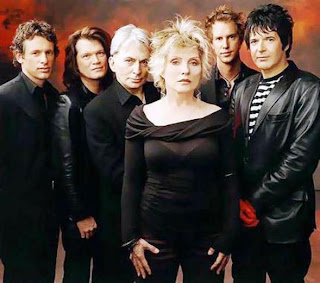 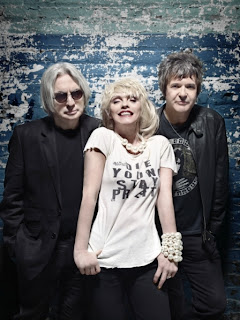 Posted by Classic Rock Here And Now at 11:52 PM