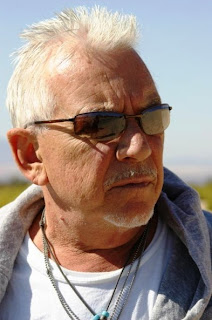 Eric Burdon is legendary for his explosive soulful vocal deliberations in many shapes and forms. As kids we idolized him as a merciless rock and roll superhero who we all wanted to secretly mirror. The British Invasion certainly had its share of coolness but The Animals entered the realm of badass. If The Rolling Stones were classified as the bad boys of the British Invasion, then Eric Burdon and The Animals were the original gangsters of Rock and Roll.

Their mega hit messages were significant and way ahead of their time. Songs that made you feel deep within your psyche and then carried through into your soul. Songs like “We Gotta Get Out Of This Place,” “Don't Let Me Be Misunderstood,” “It's My Life,” John Lee Hooker’s “Boom Boom" and the timeless proverbial favorite “House of the Rising Sun.”

Animals’ bassist Chas Chandler moved on to manage Jimi Hendrix after the group split up in 1966.
Later Burdon reformed the group as Eric Burdon and the Animals. The band’s evolution shifted towards the hippie generation and psychedelic melody while Burdon’s genius for creating Top40 radio hits heightened. Classic radio airplay anthems like “Sky Pilot,” “Monterey,” “San Franciscan Nights,” “When I was Young” and “Don’t Bring Me Down” became mainstay on the U.S. and British charts.
In 1969, Eric Burdon formed the diverse multitalented band War, spawning yet another huge hit with “Spill The Wine.”  Burdon embarked on a successful solo career in 1971.
In 1983 the original Animals reunited for a worldwide tour.

Over the years Burdon has collaborated with the greatest musicians of every genre and toured incessantly around the globe with several variations of The Eric Burdon Band.
In 1994 The Animals were inducted into the Rock and Roll Hall of Fame.
These days Burdon tours as Eric Burdon & The Animals. He’s written two critically acclaimed memoirs and will release a brand new album soon with a video about Rock and Roll pioneer Bo Diddley. Burdon attended Diddley’s funeral in Gainesville on June 7th 2008.

Marianna Proestou, Eric’s Manager, was graciously accommodating in granting my request for an interview during a hectic tour schedule.

Here is my Q&A with Eric Burdon before his show in Cleveland.

How do you explain your longevity in the music business and what artists do you miss the most that are no longer with us?

"Longevity is something I never gave a second thought to. I guess it’s the shadow of growing up in post WWII, but I never believed I would live past 20. Here I am though… a senior citizen… my voice and heart are stronger than ever, but boredom is the greatest enemy so I have to be careful not to slip over the edge. I admit that I do dwell on the past a bit, for sure there are people I miss and I wish they were still here."

Do you think Chas Chandler was good for Jimi Hendrix career?

"This question touches a very raw nerve for me. For sure Chas’s plans for Jimi initially brought light to one of the world’s most innovative guitarists, but it was inevitable that they would lock horns over creative discussions. I have to admit that Jimi was his own worst enemy, so when things got weird, Chas left. Maybe things would have been different if he'd hung in there with him."

Have you ever considered discovering and managing new bands? Afterall the rock world could definitely use some exciting new talent and who better to launch their careers.

"If I could come across someone who oozed talent and could take advise, maybe… but it’s a fact, young people don’t listen. I don’t have the energy to fight that way. The Chandler-Hendrix experience was a great lesson for me. Young talented people usually prove to be a pain in the ass. They should be managed with respect in one hand and a pistol in the other."

I’ve interviewed several prestigious rock stars who don’t have health insurance. Has this been a problem in the industry?

"To call it an “industry” is a stretch. The rock biz is the low end of the creative world. Faces come and go so fast. Insurance companies would never touch anyone who boasts about drug use, even though it may be fake bravado. “A dead rock star is worth more than a live one”

I feel that deep down you’d like to play MORE songs with a Latin rhythm. I’ve got Cuban roots and I’d really like to see that happen. I remember when Stephen Stills needed help he called in my good friend Joe Lala. Should I give Joe a call for your next album?

"One of my reasons for living in California is it’s close proximity to Mexico. The Latin influence is in every corner of the community. My love of Spanish music hasn't wavered since the 50's. I could hear the blues voicing from the Flamanco families and I always dig for inspiration in Latin music. I just got out of the studio after recording for my new album and a couple of the tracks that we laid down were heavily influenced by Latin music. The album is coming out later this year, so look forward to it."

Will rock and roll ever return to those glory days?

"Well, have you seen American Idol lately? I’m sure that some kids somewhere at this moment are thrashing themselves silly over what they call “Rock n’ Roll”"

My first book will be out soon, It’s called “Check the Gs.” I love to read and write and I believe you share the same passion. I’ve read both of your books and they were well written. Will you be writing another book soon- and I know you use to collect comic books, who was your favorite character?

“G.I. Joe” and I’ve always looked upon the young pilots of the allies, in World War II's final years, as the original hippies. I suppose I could knuckle down to pen another collection of insanity, but at the moment, I’m too busy reading…"

Casinos have become a major venue for classic rock stars, they must pay well, what has been your experience in playing Casinos?

"Like it or not, they’re all that’s left of the decent rooms to play in. I’m sure my grandfather, who was addicted to the game, would love to know that his grandson walks out of the best casinos in the world with pockets filled with dough."

How are things going on the road, what are your plans for the future and how's the family?

"My family is doing well, thanks for asking. Regarding the future: Is there going to be one? I don't know, but presently I have more shows coming up in the US and Canada and a European tour this summer. As I already mentioned I just finished recording for a new album with a video about Bo Diddley (with the families blessing of course). More recordings and exciting projects are on the way but the fans and the world are just going to have to wait and see."

I know you have asthma, the weather is wonderful here in beautiful Tampa Bay Florida, if you ever consider moving. Brian Johnson (AC DC), Rick Derringer, Graeme Edge (Moody Blues) all live within twenty minutes from me. (Jerry Wexler lived here before his passing in 2008 at 91 years old)

"I have friends who live in Florida. I love to visit. I’ve also got close friends in Mississippi, but the most beneficial place for my lungs is in dry weather. If they would stop killing each other, I would love to live in North Africa, but California, as screwed up as it is, is fine for me and has been since the 60’s."

For more information about Eric Burdon and The Animals please visit his website at http://ericburdon.com/

Eric Burdon and The Animals 2011 concert schedule can be found here.
I want to thank Eric Burdon and Marianna Proestou.  I hope to see the both of you in the Tampa Bay area- very soon.

My new book called Check the Gs is available for purchase at http://rayshasho.com/  Its "My Big Fat Greek Wedding" with a Rock & Roll twist.