ITS FINALLY HERE ...
THE WAIT IS OVER!
A BRAND NEW BOOK SERIES

THE ROCK STAR CHRONICLES
SERIES ONE
TRUTHS,CONFESSIONS AND WISDOM
FROM THE MUSIC LEGENDS
THAT SET US FREE! 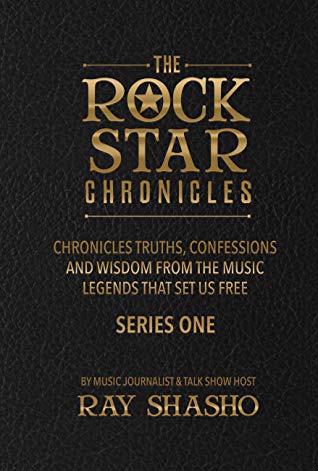 WHERE HAVE ALL THE ROCK STARS GONE?
Rock and Roll, the Blues, and Jazz are America's contribution to the arts, so why are we not fighting to preserve our own musical legacy and culture?
Rooted from the early blues pioneers, the longevity of rock and roll is second to none. But strangely enough those legendary rock heroes that we were so accustomed to hearing every time we turned on our radios had mysteriously vanished from the mainstream. The music of the 1960's, 70's and even the 80's was an important juncture in all of our lives. So many of us timeline life's precious moments with the music we remember, when the music was so great, when the music mattered. The baby-boomer generation is financially imperative yet many of its entertainment standards have been renounced.
One day, the plug was pulled on those legendary music artists. Hackers began stealing music across the internet. Online music stores popularized cheap digital singles and neglected to promote full-length albums. Radio stations changed formats to accommodate talk show radio jocks while rappers and electronic dance music menaced the airwaves. Notorious record companies began folding in droves. Record companies and radio stations that were once owned and operated by visionaries were now run by accountants and lawyers and the music world began promoting untalented wannabes. The economy plummeted, and radio stations became more concerned about how many consecutive commercials they could run instead of providing quality radio programming and entertainment value. Radio stations became corporate machines leaving no room for innovation. Throughout the 2000s, recording studios and live performances began using an audio processor called "Auto-Tune" to disguise off-key inaccuracies in vocal tracks. The device allowed virtually anyone without music skills to become a singer and new waves of mainstream radio stars were instantly fabricated. The business of music became stronger and more important than the art of music.
For more than a decade, I've been on a rock and roll pilgrimage to help promote and save the greatest music the world has ever known. Before the internet and Napster, virtuoso musicians traditionally introduced their music by way of mainstream radio stations while anxious music enthusiasts hurried to their favorite record stores and purchased a copy of the artist's latest release. Talk radio wasn't popular because there was way too much great music to play over the airwaves. Advertisers didn't rule the airwaves, the music did. Rock legends toured the world to promote their latest albums and prices of concert tickets were extremely affordable. Proficient musicians, singers, and songwriters are what made the music so great.

Available on Hardcover & E-book formats
Purchase today at amazon.com
and barnesandnoble.com
click below to purchase