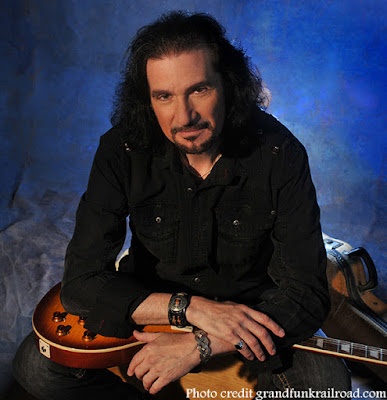 Got to Get Back is the latest release by KKB, a 1974 power trio that featured lead guitarist Bruce Kulick, singer/bassist/songwriter Mike Katz, and drummer Guy Bois. It’s a hard driving/progressive rock sound reminiscent to the styles of Cream, YES, and King Crimson. The band may have even become legendary if it hadn’t been for their lack of professional guidance. The title track …“Got to Get Back” is a brand new song. Kulick says …“I thought the way we could celebrate it the best after 40 years was actually to record a new song with the same guys, I gave Mike a riff that I thought was similar to the kind of progressive /metal trio style we did back in 1974 and he ran with it and turned into a terrific song.”

Got to Get Back by KKB is a timeless gem performed by three first-rate musicians. (5) Stars!

BRUCE KULICK was a veteran guitarist for “The Hottest Band In The World” … KISS! It was during the unmasking period for the legendary rockers who officially appeared in public without makeup in an appearance on MTV in 1983. Kulick would join KISS as their fourth lead guitarist in less than three years and holds title to the longest continuous tenure of anyone other than Simmons and Stanley (September 1984 to August 1996). Although Kulick never wore the band's iconic makeup, he says …“It keeps my era a little bit more unique and sacred in a sense and I’m there to waive the flag for it.”

Bruce Kulick played on (5) KISS studio albums … Asylum, Crazy Nights, Hot in the Shade, Revenge, Carnival of Souls: The Final Sessions. Kulick also appeared on Alive III and KISS Unplugged. The song "I Walk Alone" from Carnival of Souls: The Final Sessions is the only KISS track to feature Kulick as lead vocalist. To date, Kulick is featured on more than (20) KISS releases.

The ‘Farewell Tour’ featured original KISS members Gene Simmons, Paul Stanley, Ace Frehley and Peter Criss. Frehley left the group after the tour but Kulick was not asked to return as their lead guitarist; instead Tommy Thayer became the new spaceman for KISS. Kulick did however continue to work with the band by contributing on several albums.

Since 2001, Bruce Kulick has been the lead guitarist for Grand Funk Railroad. The original band was a power trio that featured current band members Don Brewer and Mel Schacher.

I had the great please of chatting with Bruce Kulick recently about his latest release Got to Get Back with his first band KKB … Becoming a longtime guitarist with KISS … Playing with Grand Funk Railroad … Touring … Tommy Thayer … A new solo album? … The shock of being shot …My infamous ‘Field of Dreams’ question … and much-much more!

Ray Shasho: Bruce thank you for being on the call today … I’d like to first chat about the new release “Got to Get Back” which was recorded by your first band KKB featuring the power trio of Bruce Kulick, Mike Katz and Guy Bois. It’s a great album with a fascinating story behind it.
Bruce Kulick: “Except for the first track everything came from our very ambitious efforts back in 1974. Mike found these tapes; he was the principal songwriter, singer and bassist. I did a limited edition of a tape that I found of what we did back then in 2008 and sold that on my website … it was called ‘KKB 1974,’ but I couldn’t remix any of it. Then around a year and a half ago, Mike finally found the original tapes and now we had the four tracks that we could properly mix, master, and re-master. We added a string quartet to one of the songs; I realized that since I did a limited edition of it in 2008, I thought the way we could celebrate it the best after 40 years was actually to record a new song with the same guys, and that’s what the title track … “Got to Get Back” is, I gave Mike a riff that I thought was similar to the kind of progressive /metal trio style we did back in 1974 and he ran with it and turned into a terrific song.”

“We never physically got together because it was too expensive … with Guy (drummer) living in Paris, Mike (bassist) in New York and I live in LA. Nowadays with Pro Tools you can easily share the files. It was all mixed by Brian Virtue a very talented guy here in LA and he sort of became the fourth member of the band. We didn’t want to overdo anything since we found the original tapes and could transfer that properly digitally. I could have done a lot of things … double guitars, replace parts … but I didn’t want to do that, I really wanted it to be as pure as it could be, and it’s funny how the new song fits in with the others after a 40 year gap  … its crazy!”
Ray Shasho: I was blown away how well the new track fit right-in after 40 years.
Bruce Kulick: “Mike has a very strong point of view as a musician and hasn’t changed in the 40 years; he’s always been crazy for Jack Bruce and Cream and that’s why we actually dedicated this CD to Jack Bruce. I had the pleasure of actually meeting him a few times and even jamming with him at the Rock and Roll Fantasy Camp, which was one of my dreams come true … actually playing Cream songs with Jack. But Mike was so into that whole sound of Jack Bruce and that style and I think Mike also has a terrific rock voice. But the way he constructs a song and puts it together … he’s very complete about it; you could hear all the harmonies for the vocals, we didn’t do a lot of that on the original KKB but “Got to Get Back” has a couple of different backgrounds which sound really good and it’s all Mike.”
Ray Shasho: A lot of the tracks on the new album have that progressive rock feel to it …
Bruce Kulick: “Back in the 70’s it was King Crimson, YES of course, although they used more keyboards and intricate vocals, but those bands I know we did like, especially YES. Guy and I were in a cover band together playing all the rock songs that we liked. YES and ELP were really important to us. I’m sure Mike was aware of those bands too. The two bands I would think of while KKB was rehearsing … I would imagine YES and more really Cream, but the music is more progressive than Cream. I think Mike was fascinated with fooling around with some of the time signatures. . KKB would explore a 7/8 or 5/4 time … you don’t really notice it that much because it just feels right, but you know King Crimson and YES did it a lot.” 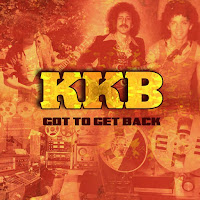 Track Listing:
Got To Get Back
I'll Never Take You Back
My Baby
Someday
Trying To Find A Way
You Won't Be There
You've Got A Hold On Me

Contact music journalist/author Ray Shasho at rockraymond.shasho@gmail.com
You can purchase Ray Shasho’s latest novel Wacky Shenanigans on F Street –Proud to be Politically Incorrect in Washington D.C. -available at amazon.com or barnesandnoble.com- Please support Ray by purchasing his book so he may continue to bring you quality classic rock music reporting.

© Copyright rayshasho.com All Rights Reserved
Posted by Classic Rock Here And Now at 2:23 AM