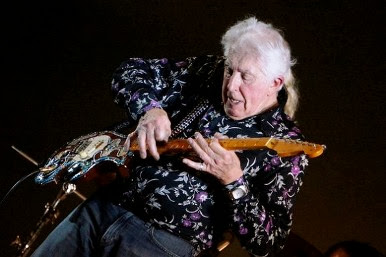 John Mayall the “Godfather of British Blues” astounded and mesmerized a packed Municipal Auditorium in downtown Sarasota on Friday night. Mayall celebrated his 80th birthday with a dynamic and flawless onstage blues performance.

The doors opened at 6 pm and the evening immediately launched with John Mayall making an unanticipated preshow appearance to sign autographs and sell a few CD’s from his never before released Historic Live Shows series. There was also a terrific snack bar at the back of the hall selling beer and Chicago-style hotdogs.

Larry McCray and his incredible band smoked a Sarasota crowd brimming with blues enthusiasts. McCray has all the necessary ingredients needed to become a legendary performer. McCray’s phenomenal soulful vocalizations were equally matched by his proficient guitar playing and songwriting expertise. McCray’s setlist included the discerning crowd-pleasers … “Last 4 Nickels,” “Don’t Need No Woman,” “Smooth Sailing,” “Never Hurt So Bad,” “Sugar Coated Love,” and “Soul Shine.” “Broken Promises” was a personal favorite; it had sort of a Van Morrison aura about it. Larry McCray is a Magnolia Records recording artist and was honored as the Orville Gibson 2000 Male Blues Guitarist of the Year. Watch for great things from Larry McCray in the near future including a brand new studio release.
Larry McCray official website http://larrymccrayband.com/
Larry McCray on Facebook
Larry McCray on Twitter
Larry McCray on Myspace

JOHN MAYALL the legendary British Blues trailblazer began his setlist around 9:30 pm. Mayall nonchalantly helped to setup his equipment onstage before beginning his set. Mayall is a perfect exemplification on how to live and act when you hit 80. His performance and intenseness on Friday night couldn’t be better. Mayall opened with “Checkin’ Up on My Baby” a Sonny Williamson II penned tune and a classic cover from The Bluesbreakers Crusade album which featured Mick Taylor. John Mayall and his incredible band of virtuoso musicians followed with “Oh, Pretty Woman” another Crusade track. The band proceeded with “Dirty Water” a song performed at John’s 70th birthday concert in 2003 which featured Eric Clapton, Mick Taylor and others. “Parchman Farm”a Mose Allison composition about the Mississippi State Penitentiary was performed next followed by “Gimme One More Day.” Mayall resumed his remarkable setlist with the Sonny Landreth penned “Congo Square” and ensued with “Natures’ Disappearing” from the USA Union album in 1970. Mayall announced to the audience that he wrote the tune because of deteriorating environmental conditions on the planet …and now look at it? “All My Life” from the 1990 A Sense of Place release was performed next.

As the evening wound down… the audience left their chairs and enthusiastically crowded in front of the stage. Mayall concluded his set with a rousing rendition of “Room to Move.” Mayall returned after a roaring encore and commented that maybe he should come back to Sarasota more often. Then bass player Greg Rzab initiated the audience to sing a chorus of “Happy Birthday” to his favorite bandleader.

Mayall finished the evening with one of the most recognized Bluesbreakers hits, the Otis Rush penned “All Your Love,” from the 1966 Blues Breakers with Eric Clapton classic album.

John Mayall’s proficient skills for playing keyboard and harp while singing in-between was incredible, and if you add the fact that he’s just turned ‘80’into the equation …it’s almost unimaginable. But John Mayall is an original and a truly remarkable man. Mayall’s voice and guitar playing were also in supreme form. Guitarist Rocky Athas’ added an exceptional and awe-inspiring performance, while Greg Rzab’s accomplished bass playing and Jay Davenport’s proficient drumming completed an unprecedented musical evening of the blues.

Music promoter Paul Koch (Owner of Magnolia Entertainment) told me that more shows like this will be coming to Sarasota in the near future.

John Mayall and Pete Seeger are living music icons that have had immeasurable impacts for trendsetting and intensifying their musical genres. Both artists are similarly revered by their peers. The evening was historic and musically impeccable. The only thing that may have made the evening of greater significance would have been a surprise appearance by some of John’s legendary friends from his 70th birthday concert. But that’s okay, because John will probably be onstage for his 90th birthday too.

Very special thanks to Jane Ebdon and Claude Taylor 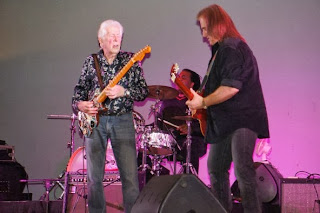 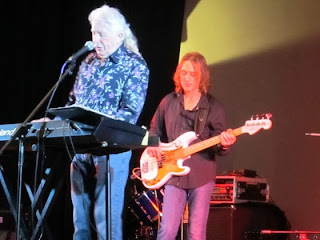 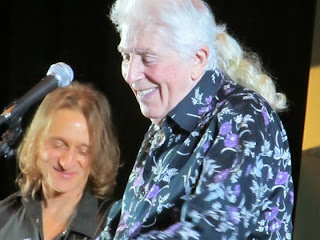