Exclusive Interview with Annie Haslam the Enchanting Songstress of Renaissance 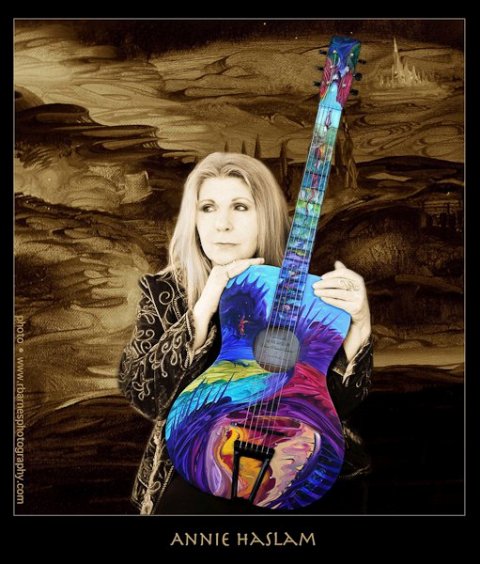 Since the bands earliest incarnation, the progressive rock ingenuity of Renaissance has been artistically mesmerizing audiences with experimental rock infused by a classical motif. And since 1971, the haunting five-octave range vocalizations for Renaissance have been alluringly characterized by Bolton, Lancashire’s Annie Haslam.
Renaissance has performed on the most distinguished stages around the world including Carnegie Hall with the New York Philharmonic Orchestra and Royal Albert Hall in London with the Royal Philharmonic Orchestra.

The group originated in 1969 with former Yardbirds bandmates Jim McCarty and Keith Relf. In an interview I did with McCarty last year, he talked about the evolution of the band.

McCarty said, “We started Renaissance and did a couple of albums with Keith and his sister Jane, John Hawken, and Louis Cennamo. In Renaissance, we sort of put in bits of Beethoven. We put an awful lot of work into it and set it all up in my house when I lived in Surrey. We rehearsed every day and just planned on getting this hour set together. We’d go and play without stopping and finally had a whole set. Then we played it around London and people just loved it. We were one of the first prog-rock bands.”

By 1971, Jim McCarty and Keith Relf had left the band to begin other projects. McCarty formed a classically provoked progressive rock band called ‘Illusion’ with former Renaissance-mates, Jane Relf, John Hawken, and Louis Cennamo. Keith Relf formed ‘Armageddon’ in 1974 with Renaissance bassist Cennamo, Bobby Caldwell (Captain Beyond, Johnny Winter) and Martin Pugh (Steamhammer). Keith Relf died in 1976 at his home by electrocution, he was 33 years old.
Also in ’71, Jane Relf was replaced with folk singer Anne-Marie “Binky” Cullum. John Tout replaced Hawken on keyboards; Michael Dunford became their guitarist, Jon Camp the bassist, and Terence Sullivan the drummer. Cullum’s vocals would prove to be short-lived; she left the band and was replaced with the awe-inspiring voice of Annie Haslam.

In 1972, the debut album for the new Renaissance lineup entitled, Prologue was released. The album’s lyrics were written by Jim McCarty, Michael Dunford, and lyricists Betty Thatcher during a transitional period for the band. Mick Parsons was to be their guitarist but sadly died in a car accident. Rob Hendry replaced him on the album. Hendry was replaced for the Prologue tour by Peter Finberg. After Finberg left, Dunford returned and became their guitarist permanently.
The classic line-up of Haslam, Dunford, Tout, Camp, and Sullivan would prove to be the quintessence of Renaissance.

In 1973, Renaissance released, Ashes are Burning. Andy Powell of Wishbone Ash played electric guitar on the title cut. The album featured musical collaborations with an orchestra, which the band embraced on many of their future classics. The album featured several celebrated compositions, “Carpet of the Sun,” the intricate but surreal, “Ashes are Burning,” and the profound, “Can You Understand?”

The band released Turn of the Cards in 1974. The album spotlighted “Mother Russia,” a heartfelt tribute to Nobel Prize writer Aleksandr Solzhenitsyn. The lyrics penned by Michael Dunford and Betty Thatcher were based on Solzhenitsyn’s novel about Soviet repression, One Day in the Life of Ivan Denisovich.
The following year, Scheherazade and Other Stories was released. The album was brilliantly arranged and considered by many to be their masterpiece. Side two entitled, “Song of Scheherazade” was based on stories from, One Thousand and One Nights (the Arabian Nights).

In 1976, Renaissance followed Scheherazade and Other Stories with a double live album, Live at Carnegie Hall. The live album was succeeded by their next release, Novella (1977).
In 1977, Annie Haslam released her first solo-effort the critically-acclaimed, Annie in Wonderland. The album was produced by her former fiancée and good friend Roy Wood (The Move, Electric Light Orchestra).
Renaissance charted their highest commercially successful single in 1978 with, “Northern Lights” (#10 in Britain) from the album, A Song for All Seasons (#58 in the U.S.).
The band changed their musical direction while transformations occurred within the music industry. Subsequent releases, Azure d’Or, Camera Camera, and their final album Time-Line, diverted the band from their progressive rock roots towards a pop music motif, in search of commercial success. The group disbanded in 1987.
Annie Haslam released her self-titled album in 1989 and began touring as The Annie Haslam Band. She also moved to North America that year.

In 1993, Annie Haslam was diagnosed with breast cancer, and music played a huge factor in the recovery process. Haslam says, "Surviving breast cancer became another milestone in my life, awakening my senses to my reality and showing me the true meaning of what I am here to do".....sing, paint and make people laugh!"
In 1995, Haslam recorded the album, Blessing in Disguise which grasped her emotions while being treated during a time of uncertainty and anguish.
With her health under control, Haslam collaborated with guitarist Steve Howe of YES on the song, “Turn of the Century.”
In 1998, Annie Haslam recorded, The Dawn of Ananda album.
In 2000, Annie released a Christmas CD entitled, It Snows in Heaven Too which received rave reviews.
Also in 2000, Renaissance partially reformed and recorded the album, Tuscany which led to a successful tour and the recording of a double “live” CD set entitled, In the Land of the Rising Sun: Live in Japan 2001.
In 2002, Annie Haslam released a “live” CD called, One Enchanted Evening.
In 2009, Renaissance triumphantly returned to celebrate their 40th anniversary. Successful tours of North America and Japan featuring Annie Haslam, Michael Dunford, and musicians from the 2001 incarnation would follow including a release of a three-track EP of new songs called, The Mystic and The Muse.
In 2012-2013, Renaissance is touring and performing their two-part concert featuring their masterpiece albums, Turn of the Cards and Scheherazade and Other Stories in their entirety.
The band headlined the sold-out North East Art Rock Festival in June of 2012.

Renaissance features the incredible duo of Annie Haslam –vocals and Michael Dunford –guitars, with Rave Tesar –keyboards and David J. Keyes –bass (Both former members of Renaissance and the Annie Haslam Band), also spotlighting Frank Pagano –drums and Jason Hart -keyboards.
Renaissance will be performing at the Capitol Theatre in Clearwater, Fl on Saturday, October 6th. To purchase tickets visit www.rutheckerdhall.com or call 727-791-7400.
A limited edition live in concert DVD and (2) CD set of their 2011 tour was released on August 14th and available to purchase on amazon.com.

Today, Annie Haslam is not only an accomplished singer and songwriter, but also an artist and fashion designer. She hopes to introduce a line of clothing that illustrates her art. Many of her art works are for sale on her website at www.anniehaslam.com
Renaissance is currently working on a brand new studio album entitled, Grandine II Vento. Annie Haslam charmingly performed a live excerpt from the album over the phone for me. She performed a piece from a track they wrote in tribute to Leonardo Da Vinci. The piece was powerful, poetic, beautiful, inspiring, and almost reduced me to tears (good thing Annie stopped singing when she did). The early preview convinced me that the new album will be awe-inspiring. Watch for a release date of sometime in January.

Purchase Ray’s very special memoir called ‘Check the Gs’ -The True Story of an Eclectic American Family and Their Wacky Family Business … You’ll LIVE IT! Also available for download on NOOK or KINDLE edition for JUST .99 CENTS at amazon.com or barnesandnoble.com   -Support Ray so he can continue to bring you quality classic rock music reporting. 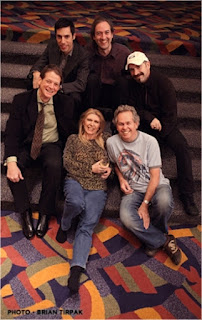 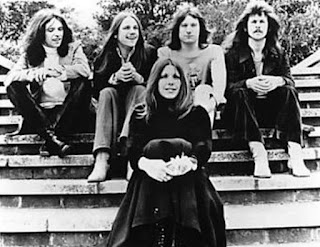 Posted by Classic Rock Here And Now at 3:41 AM