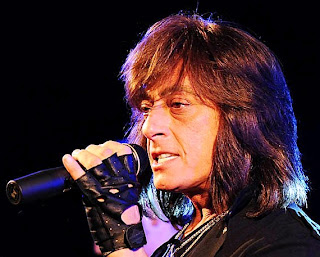 The ALL STAR ROCK TOUR arrives at Progress Energy Center's Mahaffey Theater this Saturday June 4th in St Petersburg.
The show features 80’s hit makers -Larry Hoppen of Orleans (“Dance with Me” “Still the One”), Joe Lynn Turner (Frontman for  Fandango, Rainbow & Deep Purple), John Cafferty (“On the Dark Side”), John Ford Coley(“Love is the Answer,” “I’d Really Love to See You Tonight”) and Robbie Dupree (“Steal Away”).
Tickets and further information for the concert can be found here.

Joe and I got to speak on Thursday. Here’s my interview with legendary singer/songwriter and really nice guy- Joe Lynn Turner. (And Joe, thank you for entertaining our troops in Iraq.)

These All Star-type tours that host a variety of legendary performers on one single bill really are awesome because you get to see the best of the best and it brings back so many memories.

“Yea, I like these contact tours because there’s so many great people you want to see and you can’t go to every single concert so you go to one and you see them all.”

Fandango was a great band. And I guess it was your first glimpse of the big time; the band became the supporting act for bands like The Allman Brothers, The Beach Boys and Chicago?

“Yea, we certainly did. I mean it didn’t go as far as we expected it to go. There was a lot of politics involved. It was all that five part harmony stuff. The musicianship was amazing, the writing was amazing. And of course the story is very simple, screwed over by the manager, and the producer, and the record companies. And that’s it, a very typical rock story.”

When I interviewed Eric Burdon, he said to “To call the music business an “industry” is a stretch. The rock biz is the low end of the creative world.”

“I think Hunter S Thompson coined it best in Fear & Loathing, he said, “The music business is a cruel and shallow money trench, a long plastic hallway where thieves and pimps run free, and good men die like dogs. There's also a negative side.” ”

You played guitar when you were with Fandango do you play guitar on any recent tracks?

“Maybe on the new record, but I try not to because of all the amazing guitar players that I’ve played with. It’s kind of difficult to play around guys like the Blackmore’s because these guys are ridiculous, these guys are mentors. So it’s not something I’m dying to do. I’m getting into more of the business sides of things now. But I’ve always loved the guitar; it’s always been my first love. I’ve got about forty vintage guitars.”

I watched an interview that you did on YouTube from Living Legend Music, and you talked about how surprised you were when guitarist Ritchie Blackmore called you to audition with his band Rainbow. I thought it was very funny because you didn’t think it was really him?”

“I mean, you know, who would? I thought it was my friends putting me on really. They’d do stuff like that. I’d say, okay come on. And then he’d say no it’s really me. And I’d say sure, what do want? He’d say, well there’s an audition and we’d like you to come down. Then I said, okay I’m going to do this but you’d better be there or I’m going to kick someone’s ass.”

I’d always heard that Ritchie Blackmore was a tough character to deal with and it appeared like you developed a rapport with him early on?

“It’s really something special about it, even to this day. Ritchie had been a great defender of mine. He’s always backed me up on 90% of things anyway. And it’s really special to me. But I think it’s because we both sought perfection and we both sought great music. We weren’t going to be diverted in any way. If there were disagreements we always came back as friends and got closer after that.”

I wasn’t aware that there was so much friction between Ritchie Blackmore and original Deep Purple frontman Ian Gillan?

“He hated Ian. Just out and out… can’t stand the guy.”

Was Cozy Powell in Rainbow when you were in the band?

“Cozy had just left Rainbow and Bobby Rondinelli had just come in and so I was rehearsing with Bobby Rondinelli and that’s how that happened. But I had met Cozy several times and then of course his terrible car accident. He was a great guy.”

Ritchie Blackmore had fired everybody then before you got to Rainbow?

Later you released your first solo album called Rescue You produced by the genius of Roy Thomas Baker, especially noted for his works with Queen and The Cars.

“I was supposed to be the new kid in town according to Elektra. Great album, well produced sounds great, but by the time we got finished, Roy spending all the money, and I mean a lot of money, and not just on the record but on lifestyles and things like that. But they just looked at me and said there’s no money to promote this thing. And I said what do mean? He had this huge budget and he went way over the top and got fired from Elektra and it was a big mess. But the record is such a good record. I’m proud of that record.”

Are you going to be playing some songs from your Solo efforts at the concert?

“No, strictly Rainbow and Purple stuff. People are more familiar with those songs.”

“Stone Cold” was a huge hit when you were in Rainbow?

“Yea it went AOR top 10. We’ll be playing that tune at the show. But at the same time we got shunned by certain people for going commercial. But that was our plan, we wanted to go commercial, we wanted to sell records. And we sold more records than any version of Rainbow. So it’s to our credit really. Everybody was going commercial at that time. I don’t care if it was Judas Priest or Def Leppard, everybody was going, and so you know what, we went too. I don’t know why people were so hung up on the word Commercial. Commercial means millions of people love it and you can continue your career.”

What was it like to be the frontman of Deep Purple?

Well, I took a lot of crap in the beginning. But the album (Slaves & Masters) was a very strong album, it spoke for itself.  And I think we finally won these people over, and then there was a descent within the band with Jon and Ian and they wanted to get Gillan back in and Ritchie didn’t want to have it at all, so the rest is history. He did a record with Gillan and then quit the band.”

Was it the Brits that weren’t happy with you in Deep Purple because maybe you were an American?

“It was the Deep Purple fan club president, and this guy was just going on about that we need Gillan in the band to be Purple and Ritchie hates Gillan. Now year’s later people realize that Slaves & Masters was one solid album and better than a lot of the other albums that came after it. People acted emotionally and didn’t really sit and listen.”

So many lead singers are losing their trademark voice and just don’t sound the same anymore. But remarkably you sound the same way that you did with Rainbow and Purple. I’m guessing you don’t smoke cigarettes?

“I don’t smoke cigarettes and I try to work out and go to the gym, try to eat organic foods, you know.”

Joe, you’re involved in so many projects; it’s hard to keep up with you nowadays. You were involved with the Voices of Classic Rock, Classic Rock Cares/John Entwhistle Foundation and appeared with Sarasota’s own Brian Johnson, and Cliff Williams of AC/ DC, Mark Farner of Grand Funk Railroad and Steve Luongo of The John Entwhistle Band.

“I just saw Brian Johnson the other night. He came up to New York to do a book signing  because he’s got a book out about racing cars, that’s what he loves to do. Anyway he was here for about a week doing promos and Sunday night he was off so we all went out to dinner and whooped it up a little bit. Now he’s in England with the grandchildren. So he’ll be back in about four or five weeks."

Did you hear about what happened to Brian when he took part in the 12 Hours of Sebring endurance race? He was taking a practice spin around the track when the steering wheel came off in his hands.

“Yea, he said something about that, he freaked out.”

You’ve worked with so many talented artists over the years but you always seem to reconnect with Deep Purple alumni, like working with Glenn Hughes and the Hughes/Turner Project.

“That’s right I’ve worked with Glenn a lot. We did a few records, writing a lot of songs, stuff like that. We had a good run."

“Apparently so, yea Joe Bonamassa, I’ve written with Joe on two or three of my first solo albums. I knew he was going to be a huge star; he was just a kid then. Joe’s brilliant! And I also worked with Jason before he had the Bonham band.”

I think a lot of people don’t realize how hard it is to live your lifestyle. Most only imagine the glamour of it all. I really don’t know how you guys can travel the way you do all over the globe. I’d be exhausted all the time from the jet lag.

“I don’t get paid to sing, I get paid to travel. I really do. I do a lot of international travel. 12-13 hour flights, all over Russia, all over Japan, you name it.”

And you’ve got to worry constantly about keeping your voice in shape. Anyone can pick up an instrument and play it but if you get a cold or something you’re basically screwed.

“That’s why we’re all Divas. It’s true we’re super Divas. The voice is fragile, you can play the guitar drunk and hung over but you can’t sing like that.”

Lately, I know that you’ve worked with Norwegian bassist Jan Holberg (The Jan Holberg Project). But before we wrap up this interview, I’d just like to say thank you first for entertaining our troops with your band BIG NOISE in Iraq during 2008. I enjoyed the pictures on your MySpace site and particularly liked the one of the band holding automatic weapons.

“It was great, I’d love to see a lead story line about our Iraq trip; it certainly was a life changing experience. Thanks Ray.”

I want to also thank Lisa Walker from the Spectra All Star Rock Tour for hooking me up with Joe Lynn Turner.

Order my new book called Check the Gs –The True Story of an Eclectic American Family and Their Wacky Family Business today at http://rayshasho.com/
You’ll LIVE it!

Posted by Classic Rock Here And Now at 12:36 AM